Chef Neal Fraser, owner of multiple restaurant concepts in Los Angeles, started his career in the kitchen at age 20. Fraser touts an impressive resume that includes a degree from the Culinary Institute of America and an honor roll of kitchen credits such as Wolfgang Puck’s Eureka and Spago, Checkers Hotel under Thomas Keller, Joachim Splichal’s Pinot Bistro, Hans Rockenwagner’s Rox, and the highly revered Boxer. Currently, he and his business partner/wife Amy Knoll Fraser own and operate critically acclaimed Redbird; high-volume special events and performing arts venue Vibiana; fast-casual Fritzi Coop in the Farmer’s Market at the Grove.

Located in downtown Los Angeles, Redbird is Fraser’s flagship where he showcases his signature sensibility of refined yet approachable modern American cuisine, influenced by the city’s multitude of cultures. Carved into one of the city’s most historic architectural gems, inside the former rectory building of Vibiana (the cathedral-turned-event-venue), Redbird is singular, timeless and “blissfully grown-up.” The restaurant has received many accolades including a coveted spot on Los Angeles Times’ Jonathan Gold’s 101 Best Restaurant List.

Prior to the success of Redbird and Vibiana, Fraser and Knoll Fraser opened two of Los Angeles’ most loved restaurants – critical darling Grace, and ever-beloved, breakfast, lunch and dinner bistro, BLD. A second location for BLD currently operates inside the Los Angeles International Airport.

Fraser has also been catering for over 30 years in and around Los Angeles and across the country with events ranging from intimate dinner parties in private homes to a week-long 3 meal a day Breeder’s Cup event at Santa Anita to plein air dining events with the Outstanding in the Field group, and at Coachella and Burning Man.

At Fraser’s award-winning flagship property Vibiana, which houses his critically acclaimed restaurant Redbird in its rectory building, he and his staff execute over 100 events a year in the former cathedral and over 400 events in the 5 private dining rooms of the rectory building. This is in addition to regular dinner service seven nights a week and brunch on the weekends in the 140 seat Main Dining Room. Fraser and Knoll Fraser have recently completed the development of the property with a 3,000 square foot garden and event space behind the Main Hall.

Over the years, both Fraser and Knoll Fraser have been active members in the community, donating time and talent to a variety of charities. Fraser currently resides on the board of LA’s Best. Seven years ago, Fraser and Knoll Fraser co-founded Beefsteak, an annual event benefitting the Los Angeles Food Bank with Simpson’s creator Matt Selman, comedian Eric Wareheim and comedy producer Cort Cass. As an avid cyclist, Fraser is an active participant in Chef’s Cycle, an annual event in support of No Kid Hungry.

A South Bay local, avid surfer, baseball player and potter, Cobb started his culinary career at Redondo Beach’s Chez Mélange before moving to Avellino, Italy where he began working as a at Michelin-starred restaurant, Marenna. This early career experience had significant impact on Cobb and solidified his passion for cooking while instilling discipline and a drive for excellence. Upon returning to LA, Cobb became the personal chef for Will and Jada Pinkett-Smith. He was then introduced to Top Chef Master Neal Fraser and was offered to work at his top LA restaurant Grace. During this time, Cobb joined Fraser to help open The Strand House in 2011. With the introduction of The Strand House Culinary Masters Program, Cobb was able to collaborate alongside several of the country’s most notable chefs. Chef Cobb then left The Strand House with Chef Fraser to be Executive Sous Chef at the critically acclaimed Redbird.

Cobb has a New-American, free style way of cooking that blends inspiration from cuisines all around the world. He brings healthy, fresh, flavorful food with a seasonal emphasis to The Strand House guests. Along with Cobb’s strong pedigree and extensive training, he demonstrates an exemplary work ethic dedicated to using the freshest seasonal ingredients and upholding to the fine quality of dining at The Strand House. Due to Austin’s passion for being a potter, he also hopes to begin crafting the serving plates for his dishes at The Strand House. Along with Chef Austin’s recent Food Network debut on Beat Bobby Flay, we are excited to announce that Chef Austin will be cooking at the James Beard House in April 2019. 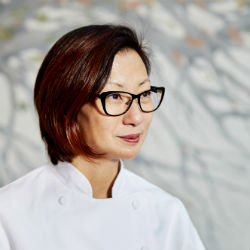 Chef Della Gossett, Executive Pasty Chef
Della Gossett earned her bachelor’s degree in Arts Education and Painting from the University of Illinois, Champaign-Urbana. Following her studies, she received an offer from Trio restaurant in Evanston, Ill., where she stayed for six years working with nationally-acclaimed pastry Chef Gale Gand, and later with Executive Chef and restaurateur Shawn McClain.

In 2000, Gossett moved to New York to work at Atlas in Central Park South.

Gossett returned to Chicago in 2001 to work at Charlie Trotter’s, the Mobil Five Star, AAA Five Diamond restaurant and winner of 10 James Beard Foundation awards. She remained there as the pastry chef for nearly a decade.

Gossett regularly participated with The Charlie Trotter Excellence Program, where three times a week she and members of her team shared their work with Chicago high school and middle students, teaching youngsters about excellence and the importance of always trying to attain excellence, no matter what the pursuit.

Following her time with Charlie Trotter, Gossett accepted a coveted role as Pastry Chef Instructor in The French Pastry School’s L’Art de la Pâtisserie, The Professional Pastry and Baking Program. It was a prime opportunity for Gossett to bring her many years of restaurant experience to share with her students. Gossett’s philosophy on the pastry arts involves a fidelity to the ingredients while also celebrating experimentation and creativity.

In 2012, Gossett was approached by legendary chef Wolfgang Puck to join his team at Spago and lead the pastry department at his iconic restaurant.

Gossett was named one of the “Top Ten Pastry Chefs in America” Dessert Professional in 2014 and featured as one of LA Weekly’s “People of 2015.” In 2016, she was honored with the Women Chefs & Restauranteurs “Women Who Inspire – Golden Bowl Award.”